Amalfi Coast here we come, all nine of us in a mini van!

The day started early, we were the last to the picked up at 7am. Vincenzo (who drove trucks, buses and then tour buses for many years) was in the drivers seat. We passed through Abruzzo, then Molise and into Campagna, past Mount Vesuvius and towards Napoli, turning left and making for the Amalfi Coast. Green hills and snow capped mountains in the distance, villages perched atop rocky outcrops gave way to plains and eventually the outer edges of the city.

To say the Amalfi Coast is stunning would be an understatement. It is truly amazing and words and pictures don't do it justice. Sheer cliffs, houses and buildings perched on the edge, seeming to emerge from the very rock itself, blue water and a winding road. And people. And cars. The road itself is narrow and winding, one lane each way, barely wide enough for cars to pass. The traffic was horrendous, a slow crawl at best, stop start stop start the norm. Tour buses, cars and motor bikes edged their way along the route, passing with only centimetres between. At times I could have put my hand out the window and touched a stone wall and often there was a very vertical drop with a simple guard rail as a safety precaution. Luckily Vincenzo is an excellent and experienced driver! There were few places to stop and take a photo or admire the view and literally nowhere to park. We managed a couple of quick snap shots out of the car window but soon gave up and just 'enjoyed the ride'. 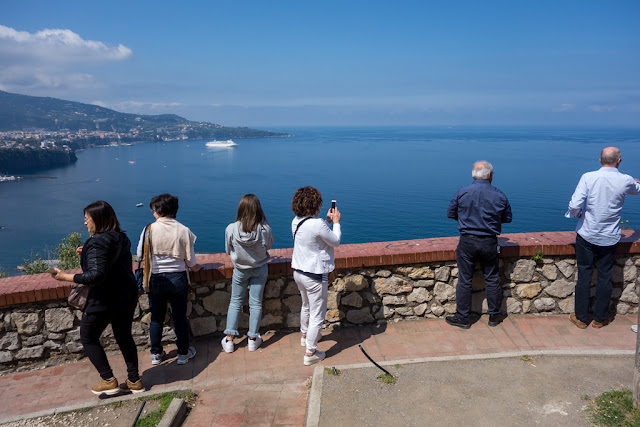 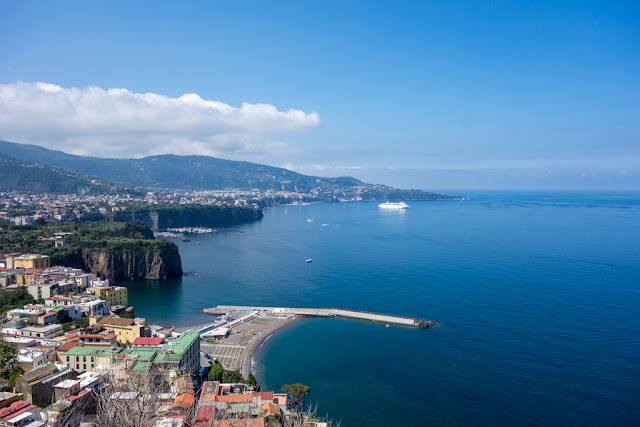 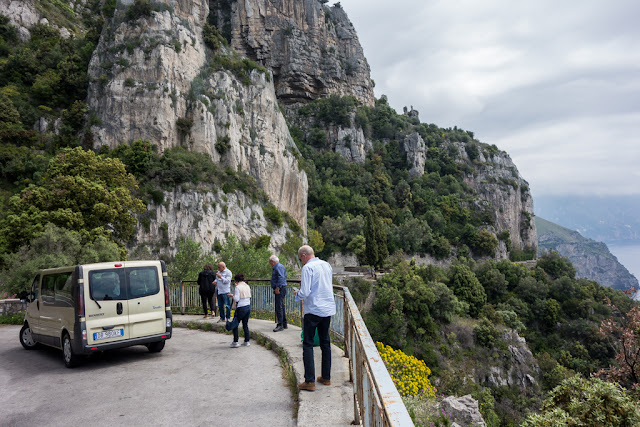 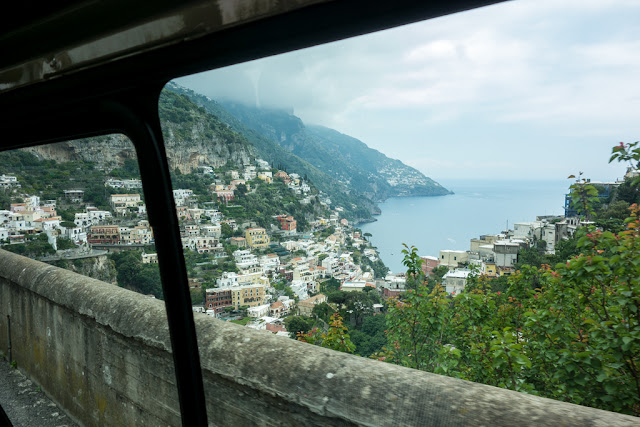 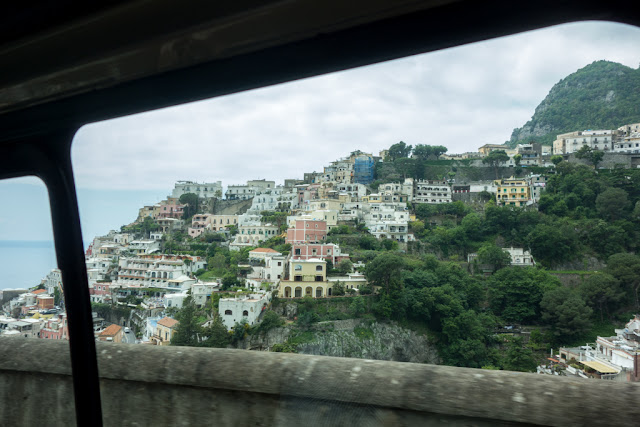 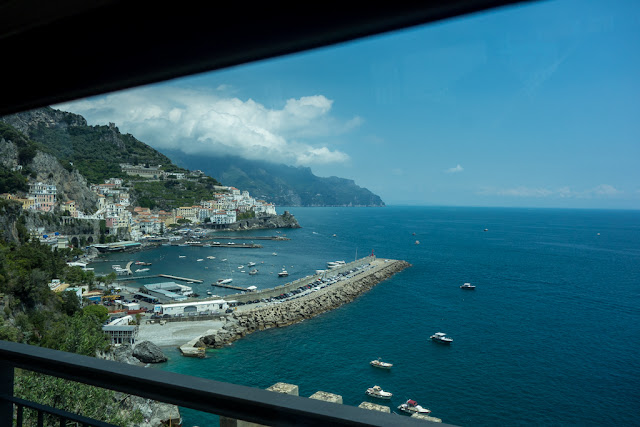 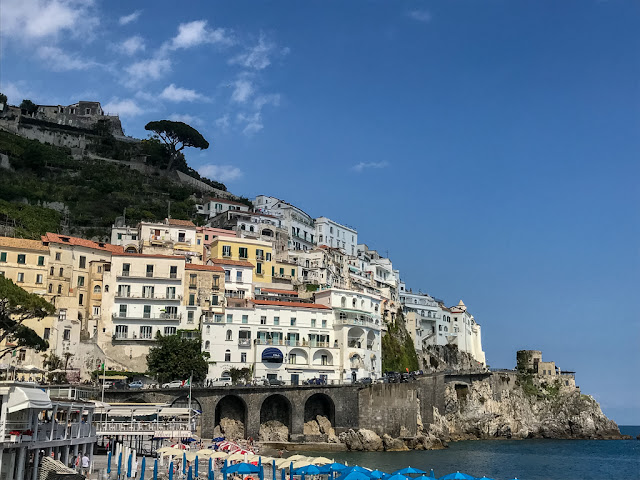 It was impossible to find a place to park so we ended up taking one of the side streets in Amalfi and pulling over to have a quick bite to eat (picnic style) from the back of the van. A police car drove past and asked us to move on, luckily we were finished anyway. 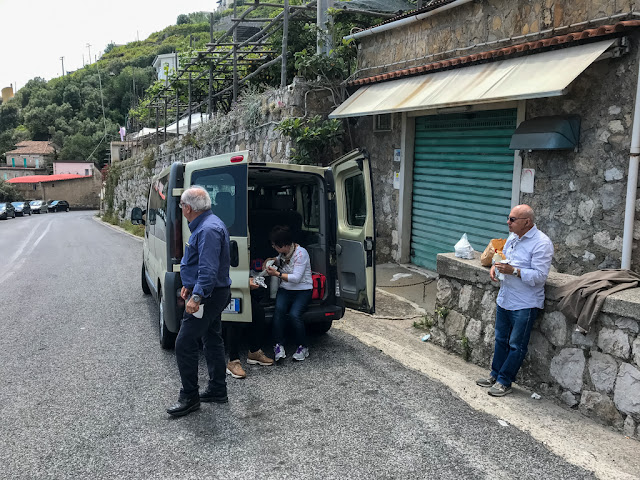 Vincenzo dropped us in the main part of Amalfi and we wandered in the piazza and the shopping strip (full of tourists and generally tacky shops). I'm not sure where Vincenzo went or where he parked while he waited.

We headed into and over the mountains, taking a short cut to the autostrada. Everyone was giving Vincenzo a hard time about his choice but the mountain views were amazing and we passed small country towns perched in the most unbelievable places, orto's (blocks of land where people grow stuff), old houses and patched up roads. I thought we were heading home, but no, next thing I know we are in Napoli, a chaotic, busy, bustling alive city. I did close my eyes a number of times as Vincenzo 'merged' into traffic and crossed roads where there were no traffic lights. We stopped (well Vincenzo kind of parked on the street) so that Anna and Giovanni could go to a particular shop that sells Italian confetti (small almond sweets covered with a crisp sugar coating, given to guests at important occasions such as the upcoming baptism of their youngest grandson). They are delicious, we bought some too! Vincenzo managed to manoeuvre the van into the centre of Napoli and 'kind of park' (that means just stop where there is a space and stay with the van) while we looked at the piazza, a shopping strip and tasted some local pastries.

Then it was 8pm and time to head home. An unforgettable experience, made all the more precious for sharing it with family.