The vibrant golden Spring fields of canola have given way to the dry brown Summer fields of hay. It has been interesting to drive familiar roads and watch the fields change with the passing of a season. I had been meaning to take my camera and try and capture something of the summer fields but there was always a reason why 'not today', until it was almost the end of January and I returned from Tassie to find all the bales of hay had disappeared. Bummer, I had missed my chance. Gone was the image in my mind; blue skies, a golden early evening sun and bales of hay, maybe some long shadows, an interesting fence.... sigh. On our way home from a walk in the You Yangs on the weekend we passed a field with bales of hay and an interesting fence and an old abandoned farm house. Jackpot - only it was midday with harsh light and I only had my little point and shoot. Oh well, something is better than nothing. I made Colin stop by the road and snapped a few shots. If I was really dedicated I would have gone back later in the day and with my other camera, but it was too far and I'm not that dedicated and there is always next year... 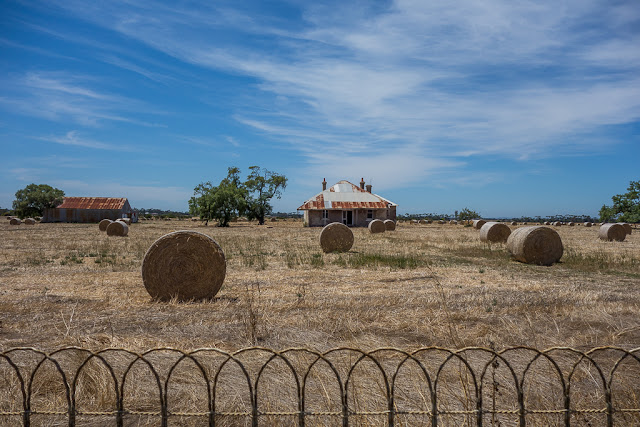 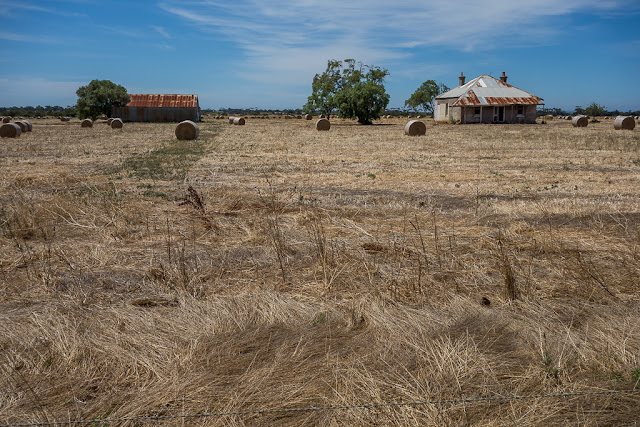 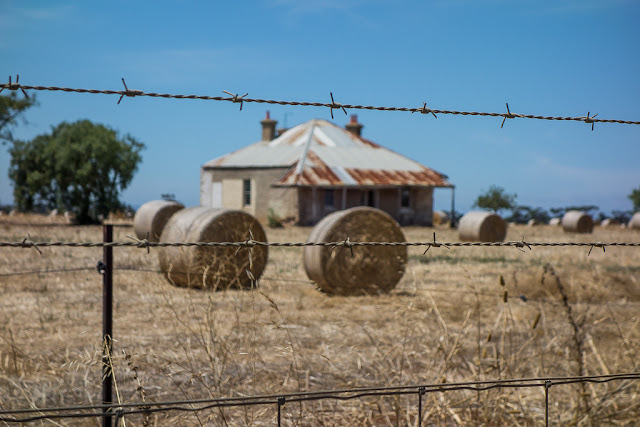 Posted by Maria DiCocco at 11:32 No comments:

Arrived home to the find the first of my cherry tomatoes had ripened in my absence. Must be my Italian heritage - such joy. 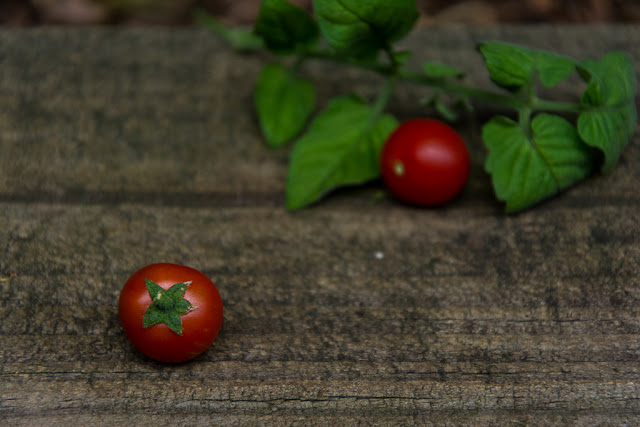 Posted by Maria DiCocco at 13:25 No comments:

When we joined our local community garden we also joined the bee keeping group there. The first time we rocked up we suited up and watched and learned as the hives were checked. Thursday was honey extraction time. We helped remove the frames from the hives, not surprisingly the bees were not too happy about it. My job was to brush all the bees off the frames as we removed them. It was a bit disconcerting having them buzzing furiously around. Next the wax caps were sliced off with a knife dipped in hot water. The frames were then placed in a spinner and with some hard yakka turning, the centrifugal force spins all the honey from the frames and it collects at the bottom of the barrel. Here it will sit for a bit and then be strained into jars. Yum. 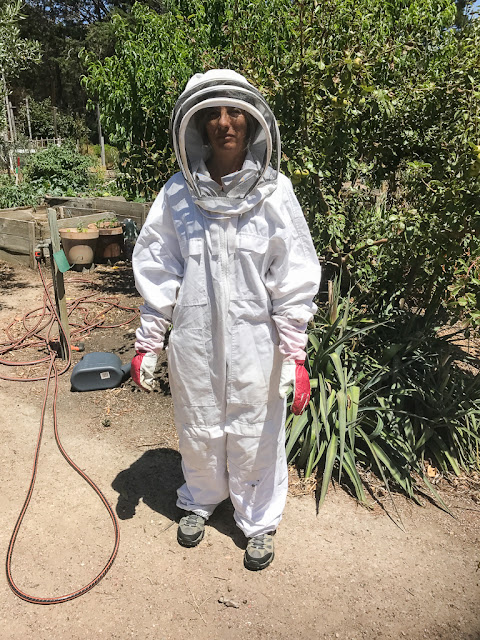 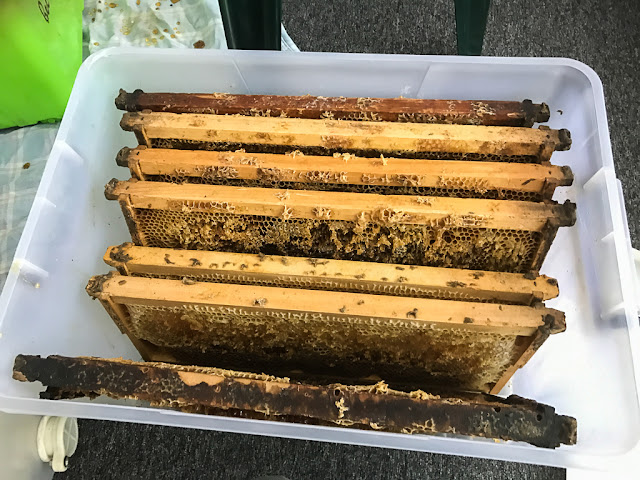 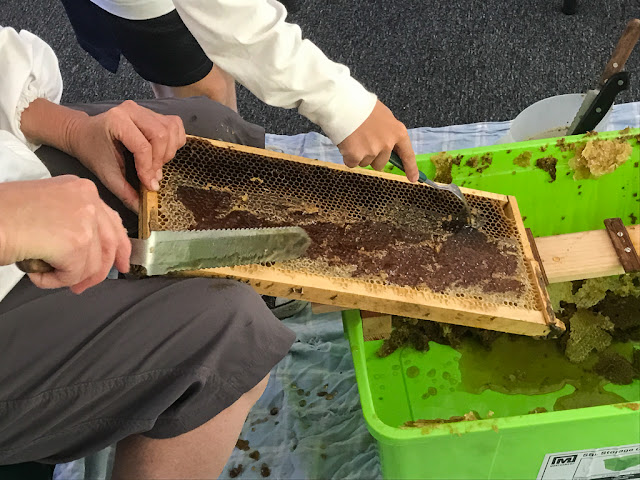 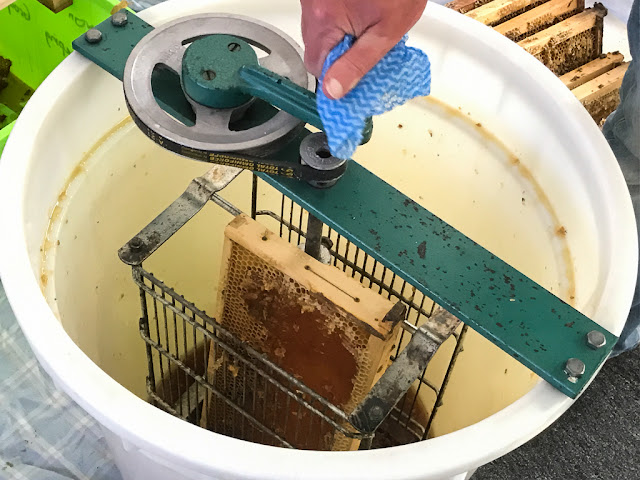 Later that same day we flew to Tassie. In Devonport on Friday, my sister and I visited my father's lawyer to finalise matters relating to his estate. At the same time Colin was very happily collecting the car he had purchased a week before. Pat, our faithful old Patrol had become a bit unreliable and was ready to be covered, garaged and sadly replaced. Colin can't bring himself to sell it, too many special memories. It isn't worth much anyway and Colin figures if he holds onto it for a while longer it may appreciate as it becomes a classic. After quite a bit of research and going backwards and forwards he finally settled on another Patrol and out of the blue a demo model was advertised at a fantastic price. It just happened to be in Devonport and we just happened to be going there the next week. A phone call later and it was a done deal. Pat number 2? 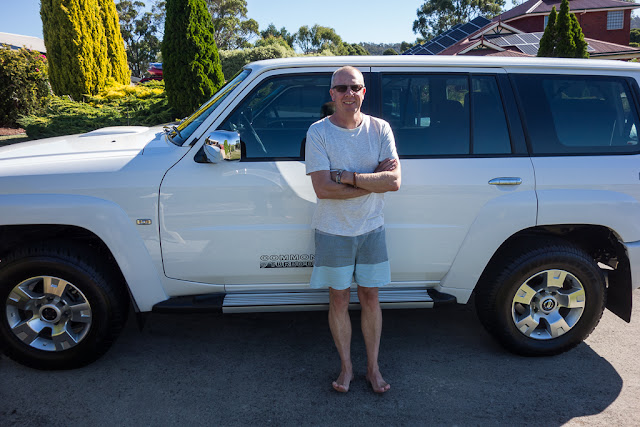 Saturday's job was to help my sister and brother in law continue to dismantle their kitchen. There was a fair bit of banging and bashing. 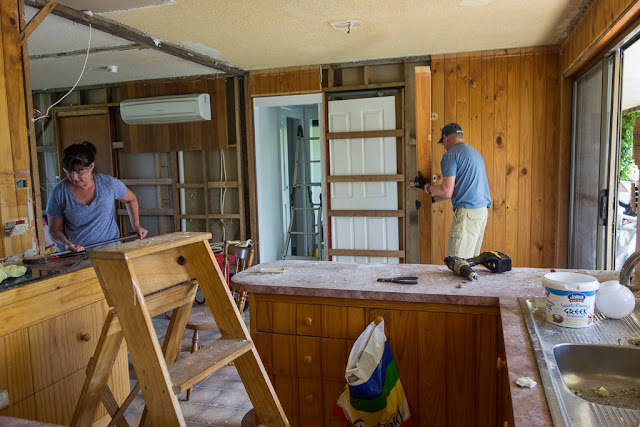 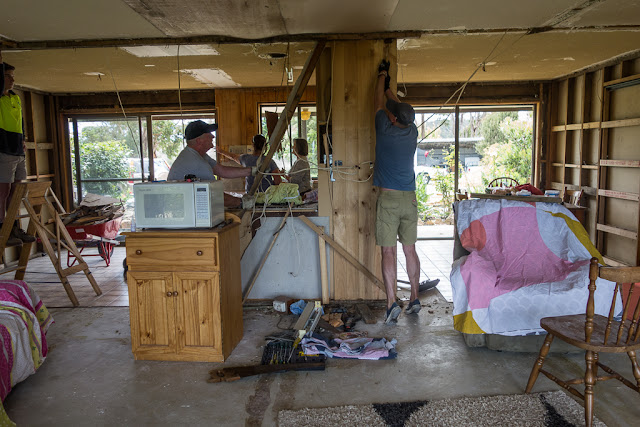 Sunday has been more sedate, morning tea with family and then lunch with my sisters and brother in laws as we finalised decisions concerning my father's ashes and a proposed family dinner with all his children and grandchildren to remember and celebrate his life.
Posted by Maria DiCocco at 19:31 No comments:

Hiking and cycling are our intention this year; so Saturday we began. A bit of practice before joining Rach in a couple of weeks for two days on the Great Ocean Walk was also somewhat of an incentive! We chose a local track, climbing the ridges behind Moggs Creek (near Aireys Inlet) and finishing along the beach. 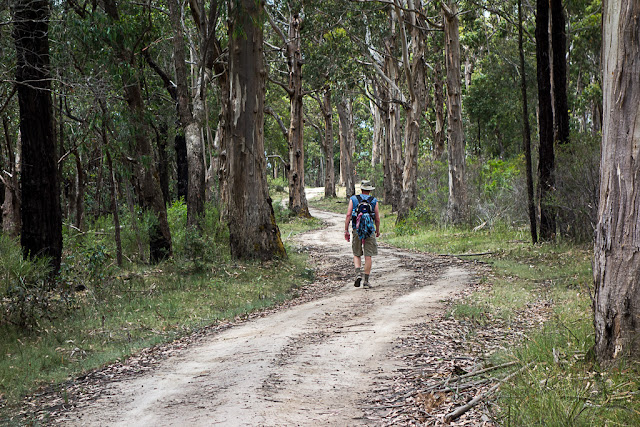 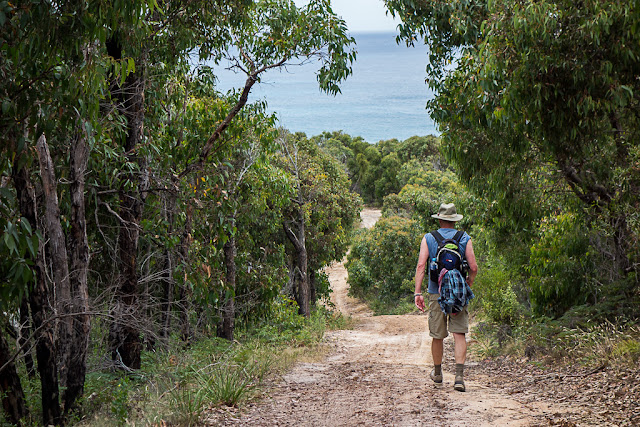 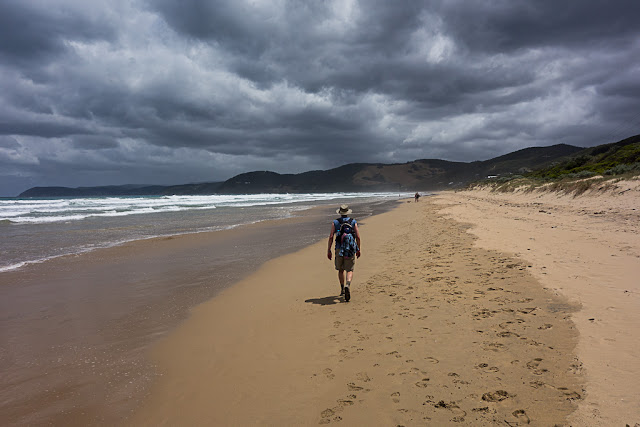 Typically, we had sun and warmth, drizzle and wind, in various combinations and frequencies. We also had the smell of eucalyptus, the singing of birds and the peace and quiet of being the only people for miles around.


At one stage Colin reached for my hand and I felt a moment of fear. When he did that last week a brown snake slithered across our path. But there was nothing, I looked at him accusingly for an explanation, "I was just expressing my love". 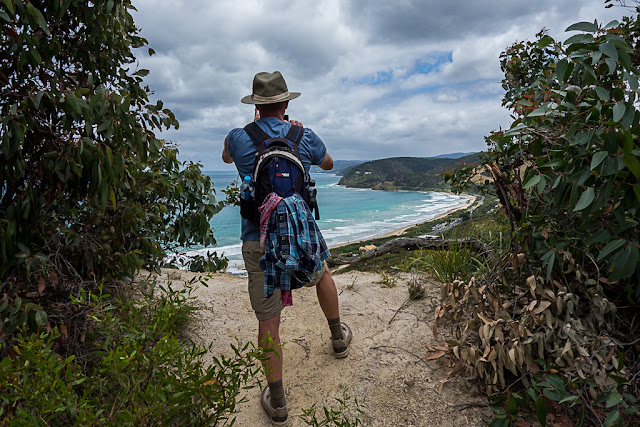 Posted by Maria DiCocco at 20:13 No comments:

On our way to Mittagundi last weekend we spent a leisurely day driving through the high plains. Remote it is and also amazingly beautiful. 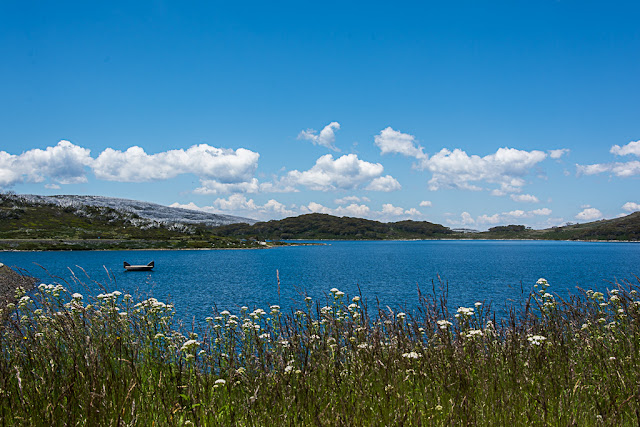 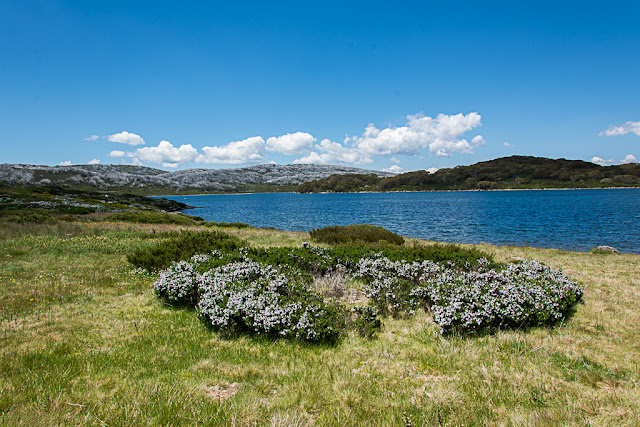 A perfect lunch spot, the flies thought so too. 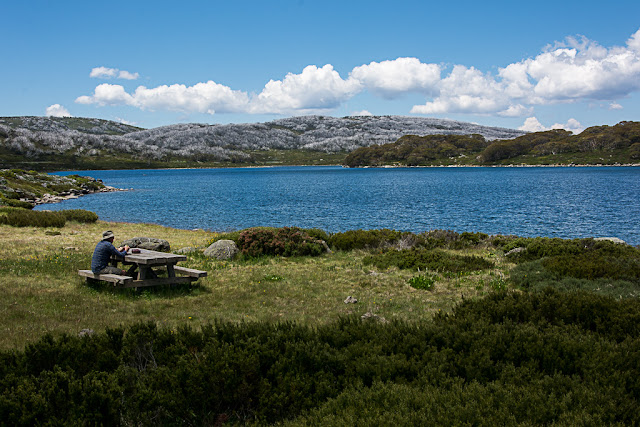 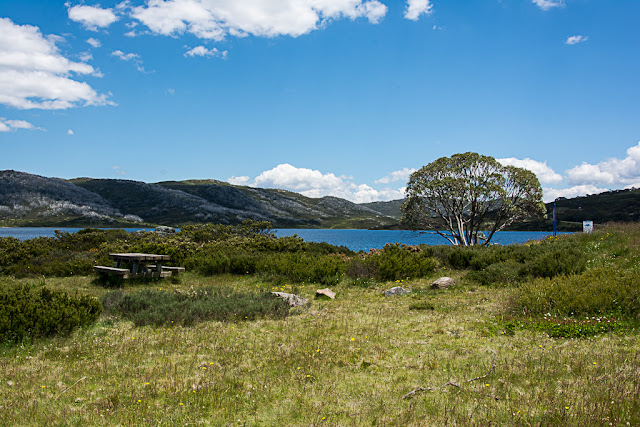 The snowy gums were a ghostly white, the after effect of a bushfire in 2003. Although they look dead, they are not, green regrowth evident around the base. 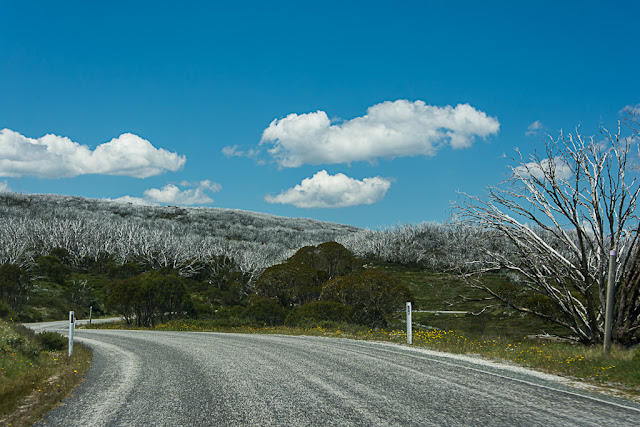 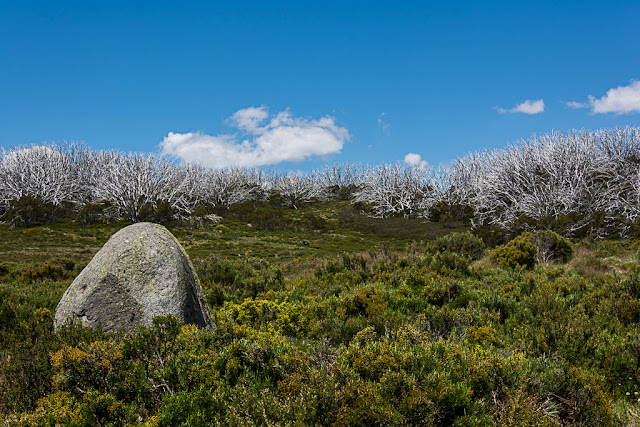 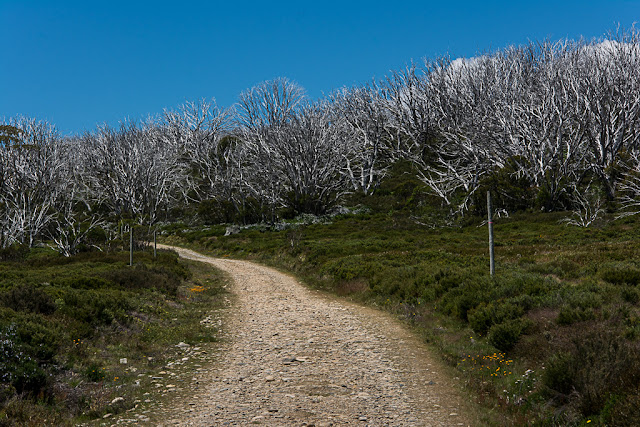 There are a number of walks around the area, we have added them to 'the list'. Now that we are minus a caravan and are fortunate enough to live by the sea our exploring will take a different form in the future. We have committed to riding and hiking in Victoria; day and weekend trips on foot or wheels, breathing in the beauty of this State we call home...
Posted by Maria DiCocco at 09:35 No comments:

There is a place in the Alpine National Park, somewhere beyond Falls Creek and near Glen Valley called Mittagundi. Rachel did a placement there in the dead of winter. There is no power, rain water only, wood stoves for heating and cooking, no internet or phone reception... she loved every minute of it. It is a place where groups of teenagers come to hike and ski and learn about independence and making do and challenging themselves. It is a place where they cook and chop wood and fix fences and make things with wood and steel (old style) and in the process learn about themselves and working as part of a team. For many it is a significant and life changing experience. It is a place where young adults run the program and are entrusted with immense responsibilities and amazingly rise to the challenge. After her placement Rachel continued to be involved returning as a volunteer on a number of occasions. Mittagundi is also where Rachel met Cass.

Last weekend was the Mittagundi Festival, its annual open day and fund raising event. Colin and I re-borrowed our tent and self inflating mattresses from the kids and drove a long way to camp in a field with a heap of other people. It has been a while since we have camped and pit toilets and no shower for the weekend was a bit of a challenge, but of the good kind. We went to a bush dance, watched passionate people do amazing things with wood and steel using basic tools, swam in the creek (well Colin did, too cold for me), watched old and new staff and young people compete in the 'Mittagundi Olympics', ate, drank and listened to beautiful music surrounded by picturesque mountains and brilliant stars at night. Best of all was seeing Cass on her own turf, doing what she's good at and getting a glimpse of what this place means to her and Rach...

Posted by Maria DiCocco at 16:33 No comments:

A last minute decision saw Rach join us for New Years day. It may have been grey and drizzly but that didn't stop us from packing up the bikes and riding part of the Bellarine Rail Trail as planned. We joined the trail at Drysdale and rode to Queenscliff, catching the steam train back. 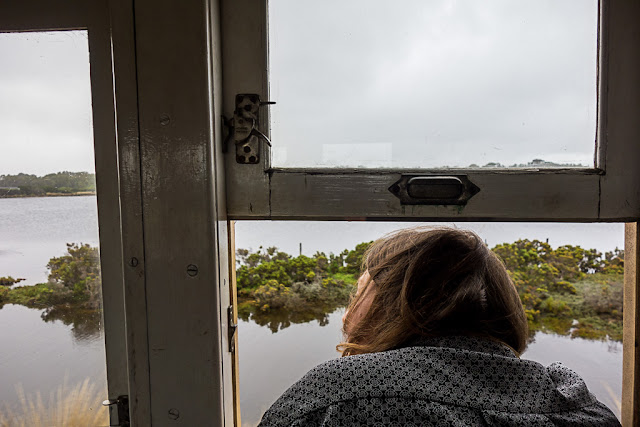 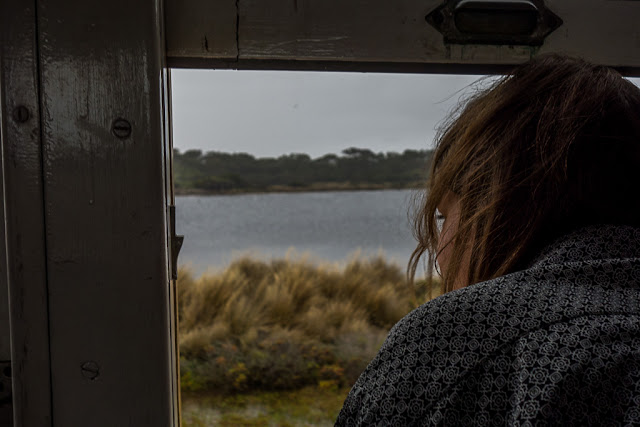 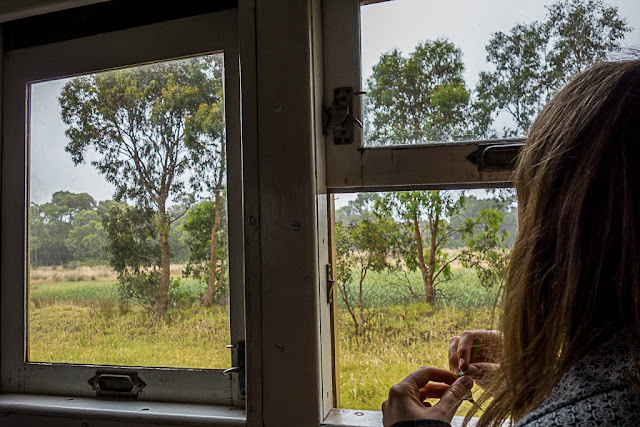 Posted by Maria DiCocco at 12:52 No comments: