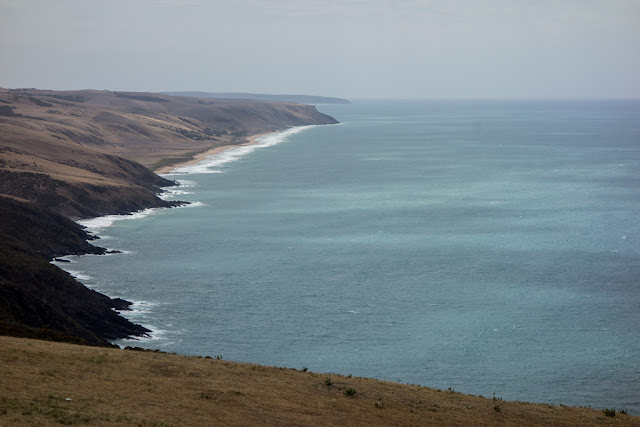 We have based ourselves in Normanville for the week, a small coastal town on the Fleurieu Peninsula. The caravan park has direct access to the beach and the surf club is a stones throw away. Unfortunately for Colin, there is no surf. He has been able to swim every morning and late afternoon but he is growing bored with the flat ocean. He has decided to add snorkel gear and swimming goggles to the packing list for the future.

Normanville is on the west side of the peninsula and we made our way north towards Adelaide stopping at many of the beaches and bays along the way. Alas for Colin, still no surf but lots of beautiful coastline. It made me think of just how much coastline we have in Australia, no wonder we gravitate towards it. (actually Australia is ranked 7th in the world for longest coastline - Canada has the most by far)

It was strange to find ourselves in traffic and amongst houses and 'normal life'. It was not a nice feeling. We were glad to turn around once we reached Christies Beach and head back to small towns and open spaces and beaches with not many people.

Another day we headed to the east side of the peninsula and checked out a few south facing beaches. Lots of swell and wind this way. The churning water was sand laden, even Colin was not tempted in here today.

We poked our heads in at Victor Harbour and Goolwa and figured we may as well go onto Hindmarsh Island and see the mouth of the Murray.


Enough of beaches for a bit (but not the coast), another day we decided to walk a small section of the Heysen Trail. We took in the views at Rosetta Bluff and then walked along the beautiful coast to Kings Beach, actually a bit further because we were enjoying it so much and you always want to know what is around the next corner! 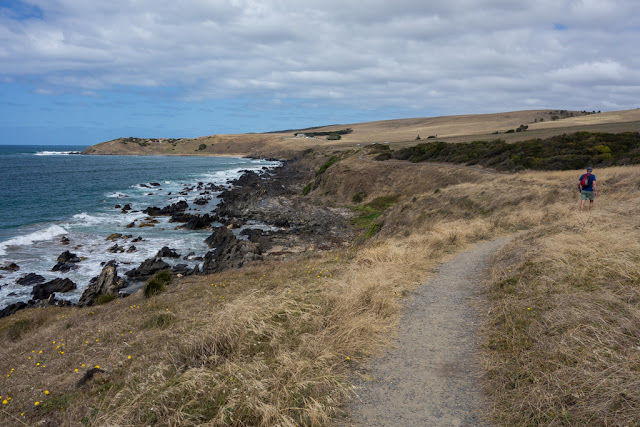 Posted by Maria DiCocco at 17:57 No comments:

Our last couple of days on Kangaroo island have been pretty much a repeat of other days, with a minor variation or two.

After a cruisey morning around town and a visit to a couple of galleries we decided it was about time to put on our walking shoes. We chose something not too far away and not too difficult. The path meandered along the coast for a bit and was supposed to end up at an historical site. 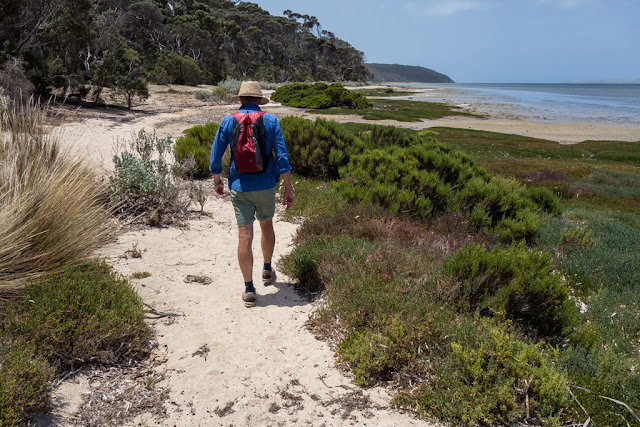 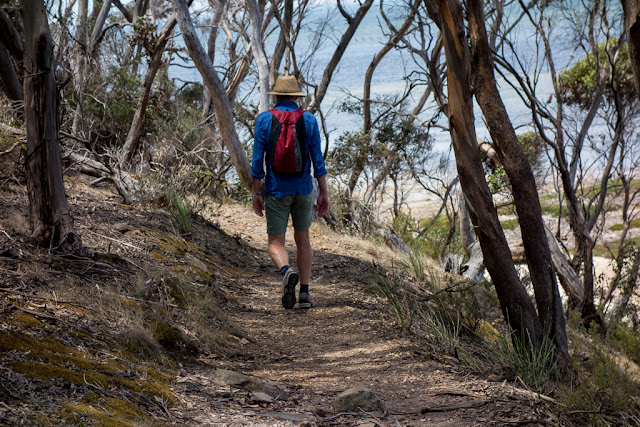 The blue wooden markers appeared to be replaced by blue ribbons tied to trees and led into the bush and up a hill. We followed (as did a young couple close behind us, equally baffled as to where the path was leading). Turns out to someones property and the blue ribbons were their markers to get down to the water and a tinny moored by the bank! Oh well, never mind, a bit of extra exercise. We opted to return via the beach and what should we stumble upon but a sign for the historic site, minus any actual evidence of a site. 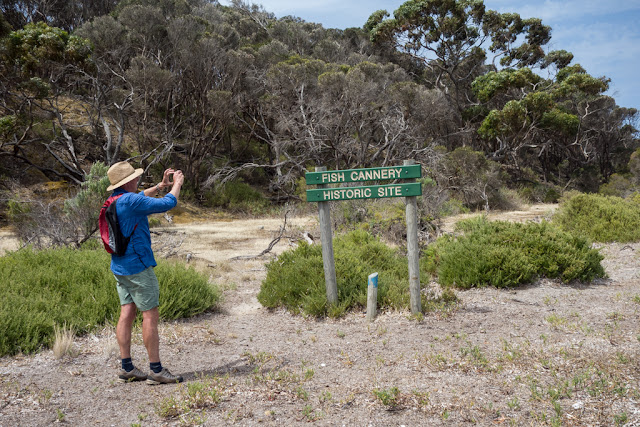 The walk back along the beach was pleasant despite rock hopping at times and walking into the wind. 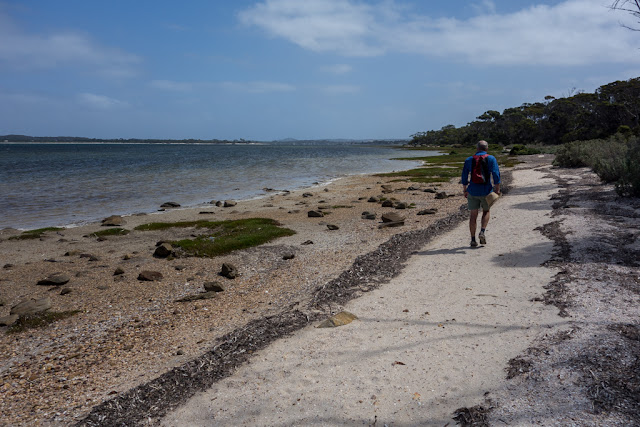 We ended the day back at Island beach (a discovery a few days ago) and Colin had a swim of course. 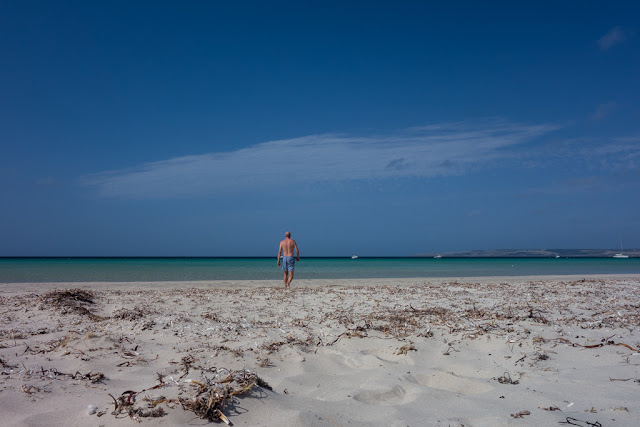 This is probably the best beach on the island if you like a long beach with soft white sand and calm water. Those in the know think so too, with quite a few 'nice' beach houses, a line of boats moored in the bay, plenty of water sport equipment and people walking along the beach with glasses of wine at 5pm. And there was a boat that was heading into shore and didn't stop, it kept coming onto the sand and wheels appeared below and it drove right up and parked on the beach.

We planned to visit Emu Bay again, Colin keen for a swim. On the way we decided to follow a dirt road and check out Boxing Bay and the North Cape. The four wheel drive came in very handy.

Colin had visions of a swim at Emu Bay but alas the clouds closed in and the wind picked up so we turned to plan B. A drive along the beach instead. 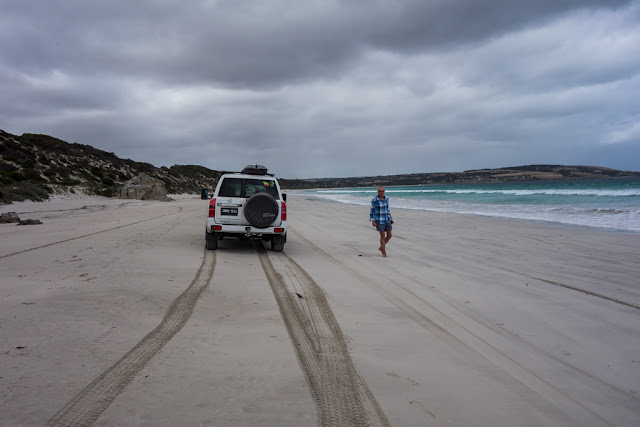 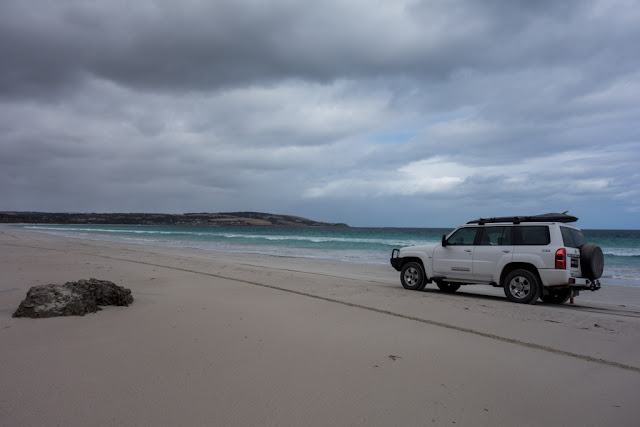 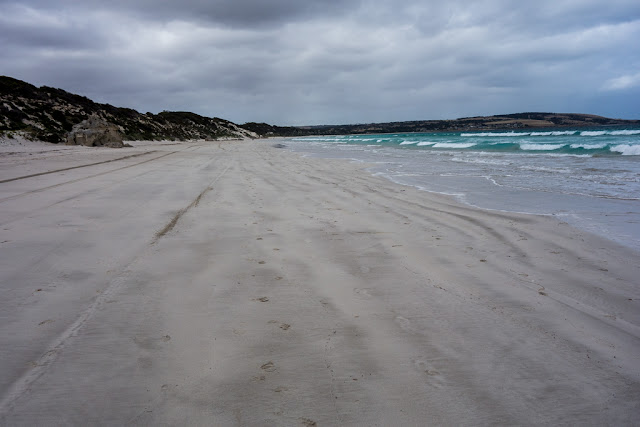 There is a great little coffee cart at Emu Bay, actually it is the only place for a coffee. We parked ourselves in a sheltered corner and whiled away the time people watching and eavesdropping. we learnt quite a bit about the place and the people. (from Colin's iPhone) 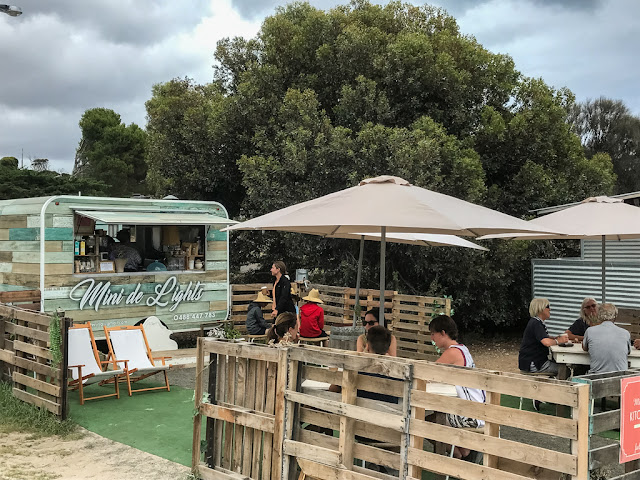 The Bay of Shoals Winery was next on the list. The couple who got lost with us (while walking) the day before had recommended it. Not a bad spot for a glass of wine and a bit of lunch.

Day 3 saw us head to Flinders Chase National Park in the south west corner of the island and for once join the rest of the tourists at a couple of iconic spots.

We returned to American River to find a shady spot for lunch and then checked the map to figure out how to get to a long strip of white sand we had seen across from Kingscote.